27 Dresses (2008): Two things about Jane: she never says no to her friends (she's been a bridesmaid 27 times and selflessly plans friends' weddings), and she's in love with her boss, George, nurturing dreams of a lovely, romantic wedding of her own. She meets Kevin, a cynical writer who finds her attractive, and that same week her flirtatious younger sister Tess comes to town. Jane silently watches George fall for Tess, a manipulative pretender. Worse, Jane may be called upon to plan their wedding. Meanwhile, Kevin tries to get Jane's attention and has an idea that may advance his career. Can Jane uncork her feelings? 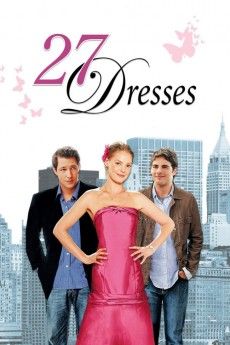 Kevin: What about you? You don't have any needs? Jane: No. I'm Jesus.

Jane: You tell him the truth or I will. Tess: No, you won't. You wouldn't hurt a fly and you definitely wouldn't hurt me, I'm your sister. Jane: That was yesterday. Today you're just some bitch who broke my heart and cut up my mother's wedding dress.

Jane: I feel like I just found out my favorite love song was written about a sandwich.

Jane: Wanna go find the ugliest stuff in the store and register Tess for it? Kevin: Let's do it.

Jane: I think you should just admit that you're a big softy, that this whole cynical thing is just an act so that you can seem wounded and mysterious and sexy... Kevin: Whoa, whoa, whoa. What was the last one? Jane: What? Kevin: Did you say "sexy"? Jane: [nervous] What? Kevin: You think I'm sexy? Jane: No. Kevin: It's okay if you do. Jane: I don't!

Kevin: [motions to a "Gone With the Wind"-style dress] What the hell is that? Jane: Theme wedding. Kevin: What was the theme? Humiliation?

Jane's Aunt: Must be so hard to watch your younger sister get married before you. Jane: Yes. Then I remember that I still get to have hot hate sex with random strangers and I feel SO much better!

Kevin: Wait, what are those? Jane: [nervous] Nothing. Kevin: Are those...? Jane: No! Kevin: Are they bridesmaid dresses? Jane: This is none of your business! Kevin: Oh... good God. What, you kept them all? You have a whole closetful? Why? Jane: I have a lot of friends and I like to keep them. Kevin: [snickering] Right. Well, that makes complete sense because they're... *beautiful*. Jane: Some of them are not that bad. Kevin: Not that bad? I'd like to see one of them that's not that bad.

Kevin: What color is that - vomit?

Casey: [after Jane turns down a drink offer from George] He asks if you want a drink. You smile and say, 'Vodka soda.' If you already have a drink, you down it. Then there's some flirting, some interoffice sex, an accidental pregnancy, a shot gun wedding, and a life of bliss. How many times do we have to go over this?

Tess: [about their childhood dog] Not a day goes by that I don't think about that bag of fleas. Good old Tory. George: Hey, Jane, how come you never mentioned Tory? Jane: I don't know. I guess I repressed the memory of *Toby*. Tess: Yeah, his name was Toby, but I called him Tory because I had a lisp. Jane: A lisp that turned your B's to R's?

Kevin: I cried like a baby at the Keller wedding.

Casey: [on seeing Kevin] Who was that and where can I get one?

Jane: You write the most beautiful things. Do you actually believe in love and marriage and just pretend to be a cynic or are you actually a cynic who knows how to spin romantic crap for girls like me? Kevin: I didn't follow that at all, but I think the second one, the spinning crap one.

[Jane has just humiliated Tess at her rehearsal dinner] Casey: So what happened? Jane: He needed to know the truth. Casey: You could have told him face-to-face. I mean, I know my moral compass doesn't exactly point due north, but... if I say something's wrong, something's wrong. Jane: You're the one who's always telling me to stand up for myself. Casey: Yeah, but that's not what you did. What you did was unleash twenty years of repressed feelings in one night. It was entertaining, don't get me wrong, but if it was the right thing to do, you'd feel better right now. Do you feel better right now?

Jane: [after passing out] Are you a doctor? Kevin: No, but Tweedle Dee and Tweedle Drunk were bugging me.

Jane: God, Casey, can't you keep it in your pants for one wedding? Casey: Are you kidding? The only reason to wear this monstrous dress is that so some drunken groomsman can rip it to shreds with his teeth.

Jane: How refreshing! A man who doesn't believe in marriage. Kevin: I'm just trying to point out the hypocrisy of the spectacle. Jane: Oh! That's so noble of you. Do you also go around telling small children that Santa Claus doesn't exist? 'Cause someone needs to blow that shit wide open. Kevin: A-ha! So you admit that believe in marriage is kind of like believing in Santa Claus!

Kevin: You'd rather focus on other people's Kodak moments than make memories of your own!

Jane: Oh, my God. I feel like I found out my favorite love song was written about a sandwich.

Casey: [she and Jane are in mutual friend's wedding. Casey's hair is a mess] What? Don't look at me like that! The bitch said "Up" so it's up!

Jane: You would rather hang out with Italian models than come with me to my *awesome* work party?

Jane: You got them champagne glasses and a bottle of Cristal. George: Any way she's actually gonna believe it actually came from me? Jane: Maybe. Wrapped it like a car ran over it. George: Nice touch.

Casey: [seeing Jane] Ooh, you clean up good. *I* might even be into you.

Tess: How could you let this happen to me? [begins reading from newspaper article] Tess: "If Jane is the prototypical accommodating bridesmaid, then her sister Tess is cast as the overbearing, overindulged bride-to-be who at any moment might start stomping around Manhattan, breathing fire, and swatting planes from the sky." Jane: I had no idea he was writing an article about me. Tess: You? He called me Bridezilla! In the New York freaking Journal! I could tear him apart limb from limb!

Jane: George appreciates me for who I am! Casey: What good is it being appreciated if no one is naked?

Kevin: I think you want a wedding, not a marriage a wedding.

Jane: Can you please find somebody else to be creepy with?

Casey: Hey, do you want to come over to my place before the party? Some of the guys from shipping are coming, and they're bringing tequila and bubble wrap.

Jane: [to Tess] Did you love him, or was he just convenient?

Casey: What good is it being appreciated if no one is naked?