50/50 (2011): Adam is a 27 year old writer of radio programs and is diagnosed with a rare form of spinal cancer. With the help of his best friend, his mother, and a young therapist at the cancer center, Adam learns what and who the most important things in his life are. 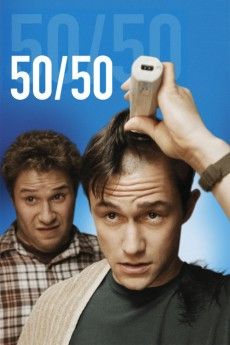 Rachael: Why am I the bad guy? Kyle: Because you're his girlfriend, you cheated on him, and he has fucking cancer, you lunatic!

Kyle: You could have totally fucked the shit out of that girl. Adam: No one wants to fuck me. I look like Voldemort.

Adam: See, but... that's bullshit. That's what everyone has been telling me since the beginning. "Oh, you're gonna be okay," and "Oh, everything's fine," and like, it's not... It makes it worse... that no one will just come out and say it. Like, "hey man, you're gonna die."

Adam: You should go. Rachael: [Kissing him] I don't want to go. I want to stay here with you. Adam: No, seriously... you need to get the fuck off my porch.

Kyle: I was in the neighborhood - I was just on a date with Claire, the girl I met at the bookstore? My date did not go well, unfortunately, due to a lack of chemistry... and, I think, an overuse of profanity on my part. But, whilst on my date... I ran into Rachael. Adam: Oh, yeah? Kyle: And I would like to present to you what I am going to call Exhibit... [Shows Adam a picture of Rachael kissing another man] Kyle: *Whore*! Look at it! That's Rachael! And that's a fuckin' filthy, Jesus-looking motherfucker, and they're kissing! I did it! I fuckin' nailed you! I've hated you for months, and now I have fuckin' evidence that you suck as a person! Holy shit! Holy shit!

Adam: What were you doing when I called? Were you on Facebook? Katherine: You know... umm... stalking my ex-boyfriend actually isn't the only thing I do in my free time. Adam: I wish you were my girlfriend. Katherine: Girlfriends can be nice. You just had a bad one. Adam: I bet you'd be a good one.

Adam: Why didn't we go to a barber? Kyle: That would have been a good idea if we paid someone to do it. Adam: Using your fucking balls trimmer instead of going to the barber. Kyle: I never washed them, ever. It's not my balls, it's my asshole. I'm joking. Adam: You're not joking.

Kyle: You smell like you fucked the cast of The View.

Adam: I see. So, have you had very many patients? Or... Katherine: My patient history is not... Adam: I'm your first patient, aren't I? Katherine: No. No, not at all. Adam: Second? Katherine: [laughs] No. Adam: Third? Adam: [Katherine rubs her hands together] Wow, okay, third. How are the first two doing?

Adam: That's what everybody's been saying: You'll feel better and don't worry and this is all fine and it's not. Katherine: You can't change your situation. The only thing that you can change is how you choose to deal with it.

Adam: Aren't you supposed to be wearing an earth-toned sweater and be like 65 or something?

Mitch: Why haven't we met Rachel? Alan: Yeah! What the fuck?

[Adam is getting chemotherapy] Alan: Want a macaroon? Adam: Thanks. I'm alright. Alan: [whispering] There's weed in 'em. Adam: I don't do weed. Alan: C'mon. Just get high with us! [Adam reluctantly eats a macaroon] Mitch: How old are you? Adam: Twenty-seven. Alan: That's just the worst. A perfectly good youth wasted. Mitch: Alan, stop it. Don't listen to him, he's just messing with you. Alan: Listen to me, this cancer is bullshit. First your hair's going to fall out, then your balls'll shrink. And if that isn't enough, your dick becomes a constant source of disappointment. [Alan and Mitch laugh] Adam: I got to tell you, I was really nervous about this whole cancer thing, and then I met you guys, and boy do I feel better.

Adam: I want this to be over. I'm so fucking tired of being sick... if this surgery doesn't work, that's it - [crying] Adam: I've never been to fucking Canada or told a girl I love her... it sounds stupid. Katherine: No. It doesn't. Adam: I'm sorry I was such an asshole. Katherine: I was the asshole. I was so totally unprepared for you. This job is really hard. If I fuck up, I could ruin someone's whole life. Adam: I guess we're both beginners at this. Katherine: [smiles] Yeah.

Rachael: [Rachael has got Adam a dog, but he does not want it] "Ok, forget it i can just bring him back to the shelter in the morning." Adam: Well then what happens to him. Rachael: He'll be put back in his tiny cage with ten other dogs who will bully and rape him until he's eventually euthanized. [the dog looks up appealingly]

Kyle: [to Adam, the night before Adam's surgery] Driving! That's what you want to do? That's your "Make A Wish"? To drive? We could be having sex with hookers while skydiving, and instead you want to do something I learned to do when I was fifteen!

Adam: You're 24. Wow! Adam: So, what, are you like Doogie Howser or something?

Kyle: Oh no. No, you're are not calling her man! After what she did to you? You're a pussy Adam! Adam: You're a selfish piece of shit! Care more about getting yourself fucking laid than being my friend!

Katherine: [after Kyle talks to her as if he is Adam's dad and she is the babysitter] Are there channels he can't watch?