55 Days at Peking (1963): Diplomats, soldiers, and other representatives of a dozen nations fend off the siege of the International Compound in Peking during the 1899 to 1901 Boxer Rebellion. The disparate interests unite for survival, despite competing factions, overwhelming odds, delayed relief, and tacit support of the Boxers by Dowager Empress Tzu-Hsi (Dame Flora Robson) and her Generals. 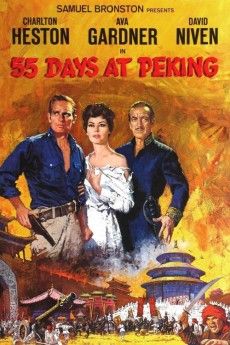 German Ambassador: You have to admire Sir Arthur; he always manages to give the impression that God must be an Englishman.

Dr. Steinfeldt: [in the hospital, while the baroness refuses medical assistance] Don't you want to live? Baroness Natalie Ivanoff: I *have* lived!

Maj. Matt Lewis: He's a good soldier when he knows what he's fighting for. Sir Arthur Robertson: It's easy when it's something you can see; a wall, a hill, a river, but how can you explain to them when it's for a principle. Maj. Matt Lewis: You can't. Not here in China, it's too far from home.

Maj. Matt Lewis: Alright, Marines, eyes front! We're almost in Peking, capital city of China. This is an ancient and highly cultured civilization. So, don't get the idea you're any better than these people just because they can't speak English.

Maj. Matt Lewis: Alright, you fight the wars. Just let us fight the battles! Will you?

Dowager Empress Tzu-Hsi: The boxer bandits will be dealt with, but the anger of the Chinese people cannot be quieted so easily. The Germans have seized Kiaochow, the Russians have seized Port Arthur, the French have obtained concessions in Yunnan, Kwan See and Kwantang. In all, 13 of the 18 provinces of China are under foreign control. Foreign warships occupy our harbours, foreign armies occupy our forts, foreign merchants administer our banks, foreign gods disturb the spirit of our ancestors. Is it surprising that our people are aroused? Sir Arthur Robertson: Your Majesty if you permit me to observe, the violence of the Boxers will not redress the grievances of China. Dowager Empress Tzu-Hsi: China is a prostrate cow, the powers are not content milking her, but must also butcher her. Sir Arthur Robertson: If China is a cow, Your Majesty, she is indeed a marvelous animal. She gives meat as well as milk, and yet grows stronger.

Capt. Hoffman: [Just before the Relief Force arrives] Those guns! They aren't Chinese!

Baron Sergei Ivanoff: [Clapping sarcastically] Congratulations, Sir Arthur! It seems the British have won another bloodless victory! US Minister Maxwell: I take it you have now unanimously decided to stay. Baron Sergei Ivanoff: I shall report in my diary the first vote was nine-to-one, and that in a... friendly spirit it was then decided to make the decision unanimous.

Lady Sarah Robertson: Do you think that if a child dies in a foreign place without ever having seen home that its soul doesn't rest? I think it goes into limbo - an enormous, empty Chinese limbo. And it wanders there, lost and crying...

Gen. Jung-Lu: It was I who gave the order to the troops to fire on the Boxers. They were burning Christian missions, killing foreigners.

Gen. Jung-Lu: If the Boxers remain unchecked, a dozen foreign armies will descend on China. Prince Tuan: We are tens of millions, let them come.

Dowager Empress Tzu-Hsi: The voice of the nightingale is still. I hear only the sound of the crows.

Maj. Matt Lewis: Remember, it's just the same here as anywhere else in the world. Everything has a price. So pay your money and don't expect any free samples!

Old Chinese Man 1: [after hearing a series of foreign military bands playing their national anthems] What is this terrible noise? Old Chinese Man 2: Different nations saying the same thing at the same time, "We want China!"

Baron Sergei Ivanoff: You're a fool. My conscience is clear. But, you have lost everything. You will end up *naked* in the streets. Baroness Natalie Ivanoff: Not entirely naked. I'll still have the necklace.

Capt. Andy Marshall: No mother and practically no father. What else can I do? Now, she's at a French mission with a bunch of Chinese orphans. Maj. Matt Lewis: You're better than most fathers. At least you try to see her when you can. Capt. Andy Marshall: Yeah, but, leaving her at a mission is not my idea of how to raise a kid. What'll I do? Take her back to Illinois with me? How would a half-Chinese kid make out in Illinois? Maj. Matt Lewis: They'd treat her like a freak back home. She's better off here among her own kind.

Sophie: [referring to Natalie's necklace] They should be around my neck! Baron Sergei Ivanoff: Of course, Sophie. You look positively naked without them.

Prince Tuan: You must conclude that all Boxers are bandits. Most of them are harmless vagabonds, entertainers in the marketplaces, much like the gypsies in your country.

Maj. Matt Lewis: What happens to you in Tientsin? Baroness Natalie Ivanoff: I'll be entirely in your hands, Major. Maj. Matt Lewis: You're in my hands now, but, you seem to keep slipping through my fingers.

Baroness Natalie Ivanoff: May I stay here with him? Dr. Steinfeldt: Your dress is a breeding ground for germs!

Sir Arthur Robertson: I believe, if we all stand united, that the Chinese won't dare mount a serious attack upon the representatives of the 11 great powers. And if we do all stand firm, we may preserve peace in China and, in deed, in the whole world.

Gen. Jung-Lu: Your Majesty, it does not require courage or spirit to rip up a few rails. The Boxers flee from the foreign devils! If Admiral Seymour be denied the use of the railway, he will now march on Peking.

Dowager Empress Tzu-Hsi: Who is there who can make muddy water clear?

Prince Tuan: The Boxers have created an opportunity for a great Chinese victory! If our troops destroy the foreign forces, it will prove to all the world that China is no longer helpless. It will be the beginning of freedom!

Dowager Empress Tzu-Hsi: China's condition can be no worse than it is! Even if we should start a war and lose it, what more can the powers take from us?

Lady Sarah Robertson: Why? Why? How did he sin? Against whom? What's he doing in this foreign place? Who's ambition is he serving? Does a child die to serve the ends of ambitions of powerful men? Who will gain from his death? Who will be happier for it? How many children must die? How many people must suffer before there's an end to all this? Don't you see that even the life of one child is too great a price to pay? It's too great a price to pay!

Dowager Empress Tzu-Hsi: There is no greater calamity than to underestimate an enemy.

Dowager Empress Tzu-Hsi: You will speak to the foreigners, Jung-Lu. You will explain to them there is no greater blessing than peace and no greater calamity than likely engaging in war.

Dr. Steinfeldt: We are back in the dark ages! No ether for anesthetics. No morphine for pain. We are in the land of opium! There are no opiates.

Dr. Steinfeldt: In the weeks we have worked together, I have learned to care for you very much. Baroness Natalie Ivanoff: Oh, I'm glad you said that. A woman always likes to hear it.

Sir Arthur Robertson: [military bands playing] Listen to them. They're all playing different tunes again. Maj. Matt Lewis: Well, for fifty-five days we've played the same tune. Fifty-five days. You held us together. You started something, at that. Maybe people will remember - someday.