88 Minutes (2007): In Seattle, the successful forensic psychiatrist and college professor Jack Gramm is in evidence since he was responsible for the condemnation of the serial killer Jon Forster, influencing the jury to sentence him to the death row. Jon accuses Jack of manipulation, inducing one witness and sister of one of his victims to testify against him. On the eve of Jon's execution, Jack receives a phone call telling him that he has only eighty-eight minutes of life, while a killer is copycatting Jon, killing women with the same "modus-operandi" and is investigated by Seattle Slayer Task Force. With the support of associate Shelly Barnes, an FBI agent, his friend Frank Parks, and his assistant Kim Cummings, Jack investigates some weird and problematic students, a security guard of the campus and the woman with whom he had one night stand. 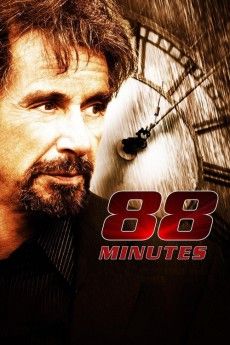 Jack Gramm: [to Kim] You asked me about my kid sister. Okay, it was a long time ago. She was staying at my apartment in New York City. She was twelve, I was twenty-eight, and I was late for a meeting. A very important meeting. Meeting that was going to change my life, was gonna make me into somebody important, make all my dreams come true. So, I went to this meeting on this dissertation, and I left her there by herself. Now I could've taken her with me, I could've left her with friends, I could've post-poned the meeting... but I chose not to because I was in a hurry. Anyway, I left her there alone. At the time, I was working on a case. This guy had strangled six women. We were very close to nailing him. He was upset, and he wanted to get back at me, so he came to my apartment only I wasn't there. At that time, I wasn't as concerned for security. I was careless, so he broke the door down and he went in, and did things to my baby sister. Catherine was her name; Katie. He did things that you wouldn't do to an animal that was bred for slaughter. Anyway, when they caught him, he laughed and said it took him 88 minutes. It took him 88 minutes to hack my sister to bits.

Dale Morris: [giving toast] To our impossibly difficult professor, we say thank you for making our lives miserable. Jack Gramm: The pleasure's all mine!

Frank Parks: I know how you use people. It's no secret you're a womanizer. You drink too much. How do I know that you haven't gone completely over the edge? How do I know what you're capable of? Jack Gramm: [yelling] Oh, man, I can't believe this! Well what did I do, Frank? Did I send myself a tape? Did I blow up my car? Did I set my apartment on fire? Did I fire bullets at myself?

Lauren Douglas: You see, Jacko, I'm a true believer. Jack Gramm: Well, you better believe that there's an FBI agent with a gun pointed right at your head at this moment. Believe it.

Jack Gramm: Justice and truth - where do they intersect?

Jack Gramm: The legal distinction between sanity and insanity rests upon what? [class recites "Free will"] Jack Gramm: The concept of free will. And what is the most important thing one should remember when entering the courtroom? Lauren Douglas: That insanity is a legal concept. It's not a medical or psychiatric term, but despite the fact that insanity's a legal concept, it doesn't mean that someone's not sick. Jack Gramm: Yes, Lauren. Of all the serial killers that I've interviewed and studied, which include our boy Bundy here, Dahmer, Gacy - none of them were legally insane. That's not to say they were normal. Mike Stempt: I could argue that they couldn't help themselves precisely because of their mental disorders. Jack Gramm: Well, if you want to argue, Mike, the school of law is across campus.

Shelly Barnes: Can you ever forgive me? Jack Gramm: [while hugging her] If I can't forgive you, Shelly, I don't deserve you.

Jack Gramm: Who sent you here? Mike Stempt: What, you think I'm too dumb to figure it out myself? Jack Gramm: Yes, I do!

Jon Forster: Dr. Gramm, I want you to listen very closely, because when I get out of here I'm going to go have a nice hot meal, stop by your grave, and then piss all over it. Now, please put my angel attorney on the phone. Jack Gramm: She's dead. It's over, Forster. Except for the clock that goes tic-tock, tic-tock. You got twelve hours to live. [throws cell phone away]

[last lines] Jack Gramm: [to class] Hello, everyone. Jon Forster's dead. His execution was not a cause for celebration, nor is it an vindication. It is a chapter in the road to justice and recovery. I personally don't believe in capital punishment. I do believe in the rights of victims. I do believe that they deserve recompense, no matter how significant or insignificant it may be in comparison to the loss suffered. I've suffered such a loss and, like some of you here, I have spent those sleepless nights trying to desperately to squelch down that vile-ish instinct for revenge. And I have wondered if this pain will ever abate. I've learned that time does not heal the wound. It will, though, in it's most merciful way, blunt the edge ever so slightly. So... what is the first thing one should remember when entering a courtroom?

Jack Gramm: Whoever stole that tape knows the meaning of 88 minutes.

Jon Forster: [to Jack] Why don't you take a good look at your watch. A good look. Now imagine what it would be like to be minutes away from your own death. Do you hear the ticking of a clock and knowing that your time on earth is drawing to a close?

Jack Gramm: I don't have *time* to explain this!

Kim Cummings: [when trying to unlock the car] That's funny. It worked in the garage. [Jack suddenly panics and gets her away from the car] Kim Cummings: Why did you do that? Jack Gramm: I don't know, I was thinking that... [the car explodes]

Jack Gramm: [to Frank, who's trying to arrest him] Can't you see this is a frame?

Lauren Douglas: God, I wish Forster could see your face! You look so totally clueless!

[first lines] Kate: Look at me. Look at the kite.

Frank Parks: We got another one. Jack Gramm: Oh, no. The same? Frank Parks: Every detail, right down to the lateral lacerations. It's the Seattle Slayer again.

Kim Cummings: Just another day in the life of Jack Gramm.

Lauren Douglas: Punctual, Dr. Gramm. I'm gonna give you a B+ for effort.