9 (2009): In a world destroyed in a war between man and machine, a hand-stitched doll with the number 9 written on its back comes to life. The world he has awakened in is frightening, but he quickly learns that he is not alone and that there are others like him, also with a single digit written on their back. The first one he encounters is 2 who tells him something of what happened to the world. 2 is also thrilled with the disk 9 is carrying, one with three unique symbols on the front. 9 soon learns that the disk and some of the other dolls who are prepared to die for the good of humankind may be the last hope for man's salvation. 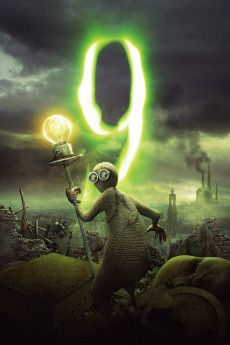 [first lines] Scientist: We had such potential. Such promise. But we squandered our gifts, our intelligence. Our blind pursuit of technology only sped us quicker to our doom. Our world is ending. But life must go on.

5: You know, you're just like him; you forget to remember to be scared.

9: You're nothing but a coward. 1: How dare you challenge me; I, who kept everyone safe all these years? Ever since you got here, everything has been unraveling! You're a curse, A FOOL, guided by pointless queries! 9: And you are a blind man, guided by fear. [something flies by the window, darkening it] 1: Sometimes fear has the appropriate response.

1: Sometimes one must be sacrificed.

1: I know enough to leave their ancient evils to molder. Look what they've left us with. Leave it be, I say! But YOU! Always asking questions. So many pointless questions. Probing. PUSHING. Like 2! He always had to know too much! 9: I was right; you DID send him out to die! 1: He was old! He was WEAK!

1: [Looking at 9, standing in front of the "Great Machine", and talks to himself about the human race] They've left us nothing. Nothing. Why do we have to right their wrongs? Sometimes one must be sacrificed. [1 runs and pushes 9 away from the energy beams that consequently suck his soul instead]

7: [after her first attempt to destroy the Winged Beast] Let me try that again.

5: Actually, I don't mind having one eye. It's easier for me. 'Allows me to concentrate on just one thing at a time, you know?

1: When we awoke in this world, it was chaos. Man and machine attacked each other with fire and metal. I lead us here to sanctuary and here we waited for the war to end. Slowly, the world became silent. The only thing that remains now is The Beast. So we stay hidden, and we wait for it too, to sleep. 9: But where did it come from? Why is it hunting us? 1: Questions like that are pointless. We need to protect ourselves; keep ourselves out of danger.

Scientist: 9, you shall protect the future.