A Boy and His Dog (1975): A post-apocalyptic tale based on a novella by Harlan Ellison. A boy communicates telepathically with his dog as they scavenge for food and sex, and they stumble into an underground society where the old society is preserved. The daughter of one of the leaders of the community seduces and lures him below, where the citizens have become unable to reproduce because of being underground so long. They use him for impregnation purposes, and then plan to be rid of him. 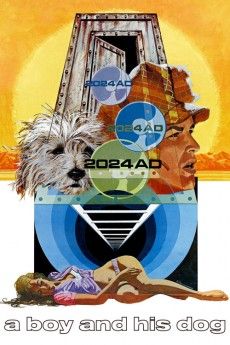 پخش آنلاین و دانلود فیلم A Boy and His Dog

نقل قول های فیلم A Boy and His Dog

Blood: I hope the next time you play with yourself, you go blind.

Blood: Breeding is an ugly thing.

Blood: A cautous young fellow named Lodge / Had seatbelts installed in his Dodge. / When his date was strapped in / He committed a sin / Without even leaving the garage. That's clever, isn't it?

Blood: You know, Albert, sometimes you can be such a putz... Vic: A putz? What's a putz? It's somethin' bad, isn't it? You better take that back or I'm gonna kick your fuzzy butt! Blood: [sighs] Yep, definitely a putz.

Vic: Hell! They didn't have to cut her! She could have been used two or three more times! Blood: Ah, war is hell.

Lou Craddock: When we put this in, then we'll add that.

Blood: Pull up your pants, Romeo.

Vic: [to sentry] If my gun picks up one rust spot you're gonna wake up with a crowd around 'ya.

Lou Craddock: Let's get another Michael out of the warehouse. This time make sure the engineering department wipes that smile off his face.

[a middle-aged, taciturn couple is brought by Michael before the Committee; all three of them talk in a very cold and impassive tone] Mez Smith: Fanny and Jurdan MacBurnatt. Dr. Moore: Why are they here? Mez Smith: Lack of respect. Wrong attitude. Failure to obey authority. Dr. Moore: Lectures? Mez Smith: Three. Dr. Moore: Cut-and-dry, then. Mez Smith: I'd say so. Lou Craddock: Any reason to be easy? Mez Smith: [shakes her head] No. Lou Craddock: [to the MacBurnatts] We find it almost impossible to believe that you have ignored several of our warnings by us to conform to the rules that are vital to the continued growth and well-being of our beloved Topeka, but you did. Defiance of this Committee, duly elected and ordained by the people, will not be tolerated. The Farm, both of them. Now, how'd the last Farms go, Mez? Mez Smith: Uh, cancer I think. Oh, no, no, no, wait... [gets up and opens up a book by the podium] Mez Smith: Let me see. I have it down here. It was an accident with farm machinery. That's what it was. Larry and Linda Lacy, March 17 of this year. Lou Craddock: Let's make these... heart attacks. Yeah, grief from the Committee. Doc will do the eulogy. Services at Lakeside Methodist, the usual. And may God have mercy on your souls.

[Vic is brought before the Committee] Lou Craddock: [to Dr. Moore] What the physical exam show? Dr. Moore: Well, the usual cold virus. A little high blood pressure... which is expected under this conditions. There's no other viral or radiation infection. He's well developed, reasonably well nourished. Intelligence: average. Emotional responses: simplistic. Most marked findings is his overly aggressive behavior. In other words, he's extremely physical, as you may have noticed. Lou Craddock: [to Vic] Well, now son... Vic: Suck wind, wet brain! Lou Craddock: Hey, you better be nice, boy. Vic: I hope all your stinking kids are harelipped! Lou Craddock: Michael! [Michael steps forward and is about restrain Vic, but Vic quickly backs down; Michael stops and steps back] Vic: [throws up his hands] All right. I'm sorry. Lou Craddock: Ready to behave yourself?

Loudspeaker Announcer: [voice] The town is the teacher of the past.

Lou Craddock: [voice-over] He will do just right. Put out the cheese.