خلاصه فیلم A Bronx Tale: The Bronx, New York, 1960. 9-year-old Calogero grows up admiring and fascinated by the local mob boss, Sonny. Calogero's father, Lorenzo, wants to have nothing to do with the mob and does his best to keep his son away from Sonny and mob business. However, it may prove a losing battle.

A Bronx Tale (1993): The Bronx, New York, 1960. 9-year-old Calogero grows up admiring and fascinated by the local mob boss, Sonny. Calogero's father, Lorenzo, wants to have nothing to do with the mob and does his best to keep his son away from Sonny and mob business. However, it may prove a losing battle. 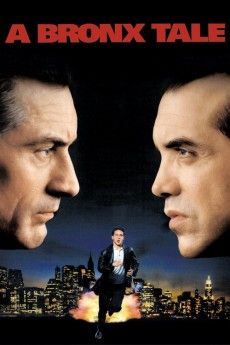 Lorenzo: The saddest thing in life is wasted talent.

Lorenzo: He's wrong, it don't take much strength to pull a trigger but try getting up every morning day after day and work for a living, let's see him try that, then we'll see who the real tough guy is, the working man is the tough guy, your father's the tough guy!

Calogero 'C' Anello: [as C walks out of Sonny's funeral] Sonny and my father always said that when I get older I would understand. Well, I finally did. I learned something from these two men. I learned to give love and get love unconditionally. You just have to accept people for what they are, and I learned the greatest gift of all. The saddest thing in life is wasted talent, and the choices that you make will shape your life forever. But you can ask anybody from my neighborhood, and they'll just tell you this is just another Bronx tale.

Priest: Don't be afraid, my son. No one is more powerful than God. Calogero 'C' Anello: I don't know about that, father. Your guy may be bigger than my guy up there, but my guy is bigger than your guy down here. Priest: Ya got a point.

Sonny: You gotta do what your heart tells you to do. Let me tell you somethin' right now. You're only allowed three great women in your lifetime. They come along like the great fighters, every ten years. Rocky Marciano. Sugar Ray Robinson. Joe Louis. Sometimes you get 'em all at once. Me? I had my three when I was 16. That happens. What are you gonna do? That's the way it goes, you know? Tell you right now. See this girl? Maybe this girl, she put wind in your sails. Maybe she's your first great one.

Sonny: First of all, I respect you, Lorenzo, you're a stand-up guy and we're from the same neighbourhood, but don't ever talk to me like that again. I tell yor kid to go to school, to go to college... Lorenzo: You don't understand: it's not what you say, it's what he sees, the clothes, the cars, the money, it's everything. He tried to throw away his baseball cards because he said Mickey Mantle will never pay the rent. Sonny: [laughs] He said that to you? I don't believe this kid. [They all laugh] Lorenzo: That's not funny. Not when your kid has a bigger bank account than you. Sonny: I offered you a job, you said "No" to me. Lorenzo: That's right, and I say "No" now. Just leave my son alone, please. Sonny: Hey! [Stands up] Sonny: Don't you see how I treat that kid? I treat him like he's my son. Lorenzo: He ain't your son, he's MY son. Sonny: He's what? Lorenzo: He's MY son! Sonny: Hey, get the fuck outta here! Lorenzo: [Shoved by the gangsters towards the door] I'm not afraid of you. Sonny: You should be. Lorenzo: I know who you are, Sonny, I know what you're capable of, and I would never step out of line, you can ask anyone in the neighbourhood who knows me. But this time, you're wrong. You don't fool with a man's family. This is my son, not yours. Sonny: What are you gonna do, fight me? Lorenzo: You stay away from my son! Sonny: Get outta here before I give you a fucking slap! Lorenzo: You just stay away from my son! Sonny: Go ahead! Lorenzo: I don't care who you are! You stay away from my son! [the gangsters force him out of the bar]

[after Sonny just allows unwanted bikers to drink in his bar] Satan's Messengers: You got some brews down here. Nice cold ones. Get us some nice cold brews, come on. Two over here, huh? One more here, one more. [Sonny takes Calogero outside and talks to him] Satan's Messengers: Alright, brothers. If I may. A toast to our host. [They all salute] Satan's Messengers: [as they shake their drinks and spray them all over the bar] In the name of the father, the son and the holy ghost! [Sonny gets angered by this and confronts them again] Tony Toupee: Look at all the shit all over me. [the bikers curse at him] Sonny: Hey! Satan's Messengers: Oh, you again. Sonny: That wasn't very nice. Now youse gotta leave. Satan's Messengers: I'll tell you when the fuck we leave alright. Get the fuck away from me. Satan's Messengers: [the bikers laugh at Sonny as he walks to the door] Go watch the bikes eh! [Sonny locks the front door. All the bikers look and curse at him] Sonny: Now youse can't leave. Calogero 'C' Anello: [narrating] "I will never forget the look on their faces. All eight of them. Their faces dropped. All their courage and strength was drained right from their bodies. They had reputation for breaking up bars, but they knew that instant, they'd made a fatal mistake. This time they walked into the wrong bar." [a fight ensues between the bikers and Sonny's gang]

Calogero 'C' Anello: It was great to be Catholic and go to confession. You could start over every week.

Calogero 'C' Anello: Sonny had five fingers, but he only used three.

Sonny: Look at me! I did this to you! REMEMBER ME!

Calogero 'C' Anello: He owes me 20 dollars. It's been two weeks now, and every time he sees me he keeps dodging me. He's becoming a real pain in the ass. Should I crack him one, or what? Sonny: Sometimes hurting somebody ain't the answer. First of all, is he a good friend of yours? Calogero 'C' Anello: No, I don't even like him. Sonny: You don't even like him. There's your answer right there. Look at it this way: It costs you 20 dollars to get rid of him... He's out of your life for 20 dollars. You got off cheap. Forget him.

Lorenzo: You stay away from that bar. You don't see me going to the bar do you ? Calogero 'C' Anello: You mean Mom wont let you go either? Lorenzo: What am I gonna do with this kid ?

Sonny: You borrow my car. And then you give her the test. Calogero 'C' Anello: What? The Mario test? Sonny: Mario? Mario's a fucking psycho.

Calogero 'C' Anello: Sonny was right. The working man IS a sucker, dad. He's a sucker. Lorenzo: He's wrong! It don't take much strength to pull a trigger, but try and get up every morning, day after day and work for a livin'! Let's see him try that! Then we'll see who's the REAL tough guy! The working man's the tough guy! Your father's the tough guy!

Lorenzo: [Coming to Calogero's defense against the angry gangsters] Calogero! Calogero! [to Sonny] Lorenzo: What happened to my son? Sonny: Drive your bus and get the fuck out of here! Lorenzo: I'll get my fucking bus! [Tries to hit Sonny, but the gangsters grab him] Lorenzo: You put your hands on me, I'll stick you in the fucking ground! [the gangsters punch Lorenzo in the stomach and knock him down] Sonny: Next time find out what's going on before you open your mouth.

[Anello family eats steak once a week] Calogero 'C' Anello: I'm not in the mood for steak.

Calogero 'C' Anello: They say you didn't walk with JoJo, you walked among him.

Lorenzo: Sometimes in the heat of passion, the little head tells the big head what to do, and the big head should think twice about what you are doing.

Lorenzo: [about C] The other night he tried to throw away his baseball cards because he said Mickey Mantle would never pay our rent. Sonny: [laughs] He said that to you? I can't believe that kid. [They all start laughing] Lorenzo: That's not funny. Not when your kid has a bigger bank account than you do.

Lorenzo: People don't love him, they fear him. There's a difference.

Slick: I wanna shoot someone y'kno and this feels like just the gun to do it with.

Willie: [to Calogero] What is it, li'l white motherfucker?

Sonny: No-no-no. Coffeecake, no good. I don't want that face lookin' at his face when he's rollin' my dice. Jimmy! Grab a towel from the bar!

Sonny: There's only three things you can do in the joint, kid: lift weights, play cards, or get in trouble. Calogero 'C' Anello: What did you do? Sonny: Me, I read.

Angry Black Neighbor #1: They started out as white BREAD. Now they're toast!

Calogero 'C' Anello: I was getting two educations: One from the street and one from school. That way I'd be twice as smart as everybody.