Beethoven's 3rd (2000): The Newton family from the first two Beethoven movies are on vacation in Europe, but do plan to join a Newton family reunion, and to make sure one of their family members definitely makes it, they ship him to travel to the reunion with George Newton's brother Richard. Guess which family member it was? That's right, Beethoven! The giant dog follows Richard Newton and his family of a nagging wife and two bratty kids, as they hit the road to California in a huge, shiny, and expensive RV, equipped with a DVD player. Following them, are two bumbling crooks who have hidden some secret codes on a DVD that they figure no one in the world will buy, but someone does: Richard. So now they have a DVD holding top secret information, and the crooks must get it back. —Dylan Self 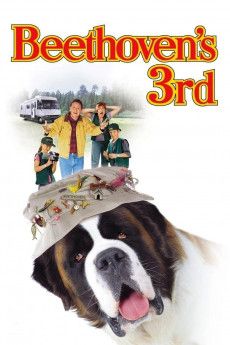 [Sara is filming Brennan] Sara Newton: So, Brennan. Dad said this is going to be the funnest vacation ever. Can we get your reaction? [Brennan flips Sara off] Sara Newton: [tattling] I'm gonna tell you did that!

[Beethoven has outrun both Tommy and Bill; resulting in crashing their car and drenching it in cement] Bill: That dog trashed the car! Tommy: [stuttering] J-just don't tell my mom! Bill: [sarcastically] It's covered in cement. Tommy: Don't tell her. Bill: [as he tries to wipe the wet cement off the windshield] Oh, she's gonna know.

[after Beethoven saves Sara from being kidnapped] Beth Newton: Beethoven, I was wrong about you. You are a hero.

[Brennan tries to watch "The Shakiest Gun in The West" on the DVD player; but as he presses play, he sees a computer code] Brennan Newton: [to his dad; regarding the DVD] Dad, this disc is a reject. Richard Newton: What? No, that was supposed to be one of the highlights of the trip.

[Richard shows his family the RV for the first time] Richard Newton: [to Brennan] Hey, Brennan. I bet all your friends are gonna be staying in hotels this summer. We're gonna sleep beside pristine lakes in the great outdoors, and the beauty of it is... Richard Newton: [shouting; to his family] ... this rig has everything! So, you'll never even know you left home. Brennan Newton: [not excited] That's just it, Dad: It's home, but smaller for two weeks.

[the Newtons are debating whether or not they should bring Beethoven] Sara Newton: [to her parents] You wouldn't put Ted, Ryce, or Emily in a kennel, and Beethoven's our cousin, too.

[Bill and Tommy, both wearing sumo outfits are chased by Beethoven back into their car] Tommy: [to Bill] I knew we should've taken your mom's minivan!

[Richard is driving the RV through a bug zone on a desert road] Brennan Newton: So, Dad, that hotel I mentioned? It's pretty close by. Richard Newton: [to Brennan] We're not staying in a hotel. I didn't stay in one in my childhood motor home trip, and we ain't staying in one now! We're perfectly fine in our house on wheels, everyone got that?

[first lines] [Sara and Beth are packing for their trip] Beth Newton: What are you doing? Sara Newton: [holding a camcorder] Dad said I'm family videographer. I'm documenting our journey! [Beth grabs some items and chuckles at Sara's comment] Beth Newton: We're not going on a journey, Sara. We're going on a very long drive. Beth Newton: Nuh-uh! Dad said we're taking a journey! [Beth chuckles again] Sara Newton: Does the R.V. have a power port for my laptop? Beth Newton: Well, we're on a budget, Sara and the economy R.V. might not even have a toilet; but I'm sure it has a cigarette lighter. Sara Newton: [sternly] Power port, mom. We don't say "cigarette lighter" anymore. Beth Newton: Well, we also don't walk around with a milk mustache no matter how much it accentuates our booger nose, Sara. [Beth wipes off Sara's milk mustache as she's filming] Sara Newton: Sorry, I'm too excited about our trip. Mom, Dad has been quoted as saying this is gonna be the funnest vacation ever. Can we get *your* reaction? Beth Newton: Honey, driving across town to a family reunion, cooking, cleaning, organizing and budgeting is not fun and *not* a vacation! Yet, it's what I do with my free time. [Beth grimaces at Sara] Beth Newton: [an old fashioned RV drives past the Newton residence] Beth Newton: Oh no! Sara Newton: [disgusted] Eww! Beth Newton: [worried this is the RV Richard bought] No, please! [the clunker of RV has passed their drive way] Beth Newton: [relieved] Thank you. [a modern RV pulls into the Newtons' driveway] Beth Newton: No! Not my gnomes! [the RV hits a couple of lawn gnomes as it stops in the driveway; much to Beth's annoyance] Beth Newton: [commenting on the size of the RV Richard has rented] He got the biggest one they had! [Richard steps out of the RV] Richard Newton: Now this... is camping! Sara Newton: [as she runs to greet her father and check out the RV] Dad, this is so cool! Richard Newton: You like it? Go check it out! [Brennan steps out of the RV irritated] Brennan Newton: [to Richard] You think that's cool? Wait until *your* friends drive by, pointing at it and laughing at *you*! Then we'll see how cool you think it is! Richard Newton: Brennan, maybe one of the just told a joke. Did you consider that? Brennan Newton: Yeah. The joke was, "Look everybody! Brennan Newton is going on vacation with his family in a bus!" God, how lame is that? Even Jessica Donnelly saw me. Richard Newton: Hey, Brenn. Your friends are all gonna stay in hotels this summer. We're gonna sleep beside pristine lakes in the great outdoors; and the beauty of it is this rig has everything! So you'll never even know you left home! Brennan Newton: That's just it, Dad. It's home, but smaller for two weeks. [Brennan takes off still irritated] Brennan Newton: [under his breath] I don't even wanna go on this stupid trip anyway.